The Maromaku project involved the construction of three reinforced concrete palisade walls with capping beams, as part of the SH1 Lynns Slip Repair at Maromaku. The reinforced concrete structure element of the project was a subcontract to Fulton Hogan who undertook the earth works for the MSE wall and the pavement construction. The project was of a technically and logistically challenging nature for GHK Piling, due to the location and the difficult access of the works.

During the tender stage, the expected methodology was to start on the wall at the bottom of the slip slope and work our way up. However, when the project was investigated further it was decided the stability of the slip face was questionable and it was best to get the top palisade walls completed to secure the hillside so there was no risk of collapse. The slip face was monitored throughout the works to ensure there was no evidence of failure.

The two top walls required reinforced concrete piles drilled up to 17m into the ground. We chose to execute this with our 25T excavator rather than our 35T crane because it meant putting less mass on the edge of the slip face, which obviously reduced the risk of collapse. With the 25T machine it meant we could reach further out from the tracks of the machine to where we drilled, which allowed us to keep the machine on sound ground. We devised a methodology where we piled the inside piles first, so that we could always have the machine behind the piles as we worked our way out towards the slip face, as safety was of the utmost importance.

The construction of the palisade retaining walls were challenging for a number of reasons. The access to the site was very difficult with poor ground conditions that would affect the access track during wet weather. Due to the limited access and no laydown areas in the direct vicinity of the works, materials often had to be double handled or triple handled prior to being put in their final place.

We encountered ground conditions significantly different from the geotechnical investigation done during the pre-design phase. We encountered hard rock for a number of piles which slowed the drilling progress. The piles required an embedment of 21m into the ground, which meant that we had to persist with core barrels and rock augers.

The construction was completed successfully. Due to the challenges above the project did take longer than originally anticipated. We were able to mitigate some of the time overrun by pouring the capping beam for the lower wall in two stages which allowed Fulton Hogan to get the bulk of the earthworks completed concurrently to the piling. We were able to run a second team to undertake the capping beam construction concurrently to the piling to ensure that the piling crew focused on their component of the works. 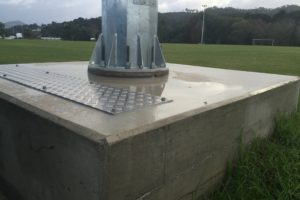 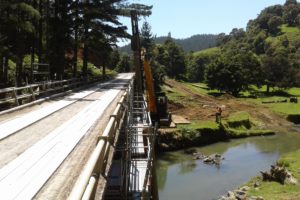 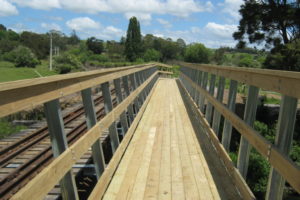 Bowling Infrastructure Group considers it imperative that all staff return home to their families fit and healthy at the end of each day, the impact of our works on the environment is minimised, and that our projects are constructed to specification, … END_OF_DOCUMENT_TOKEN_TO_BE_REPLACED