The Waiarohia Stream Footbridge was officially named the Kotuitui Whitinga on the day of the public opening – 13 September 2014.

A total of four conforming bids were received varying in value from $1.498m to $2.466m. Three of the conforming tenders received were from large, multinational construction companies and one bid, headed by Steve Bowling Contracting Limited using a selected group of local small to medium sized construction, design & consulting companies.

The tender was a weighted attributes process. This process saw our local tender scored the highest attributes, which coupled with the price saw the contract headed by Steve Bowling Contracting Limited, awarded in January 2013.

The bid was won on an architectural concept developed by Grant Harris of HB Architecture with Grant Stevens of Richardson Stevens Consulting Engineers doing the structural engineering. The initial design was to represent all aspects of the waterway – food gathering, journey, light & movement – All aimed at establishing and reinforcing “a sense of place”. Consideration was given to the aesthetics of the bridge using traditional Maori features such as the Kite (flax woven basket or bag); Ko (digging stick) and also incorporating a white baiting structure design.

For Steve Bowling Contracting Limited, one of the main focuses of the tender was to complete the project utilizing 100% local consultants & contractors from the Whangarei District. This was important as value placed on ensuring that the community could see their rate payer money was being spent within the Whangarei District & they could also feel as they were contributing to the future of the community. Steve Bowling Contracting Limited achieved this with 100% of the project being built locally. 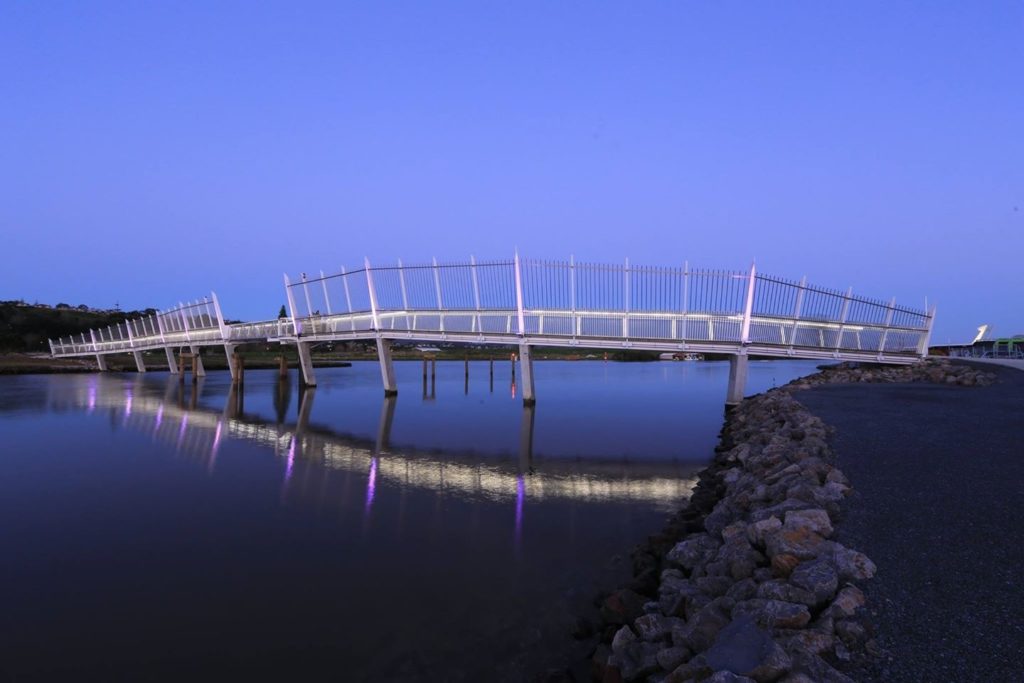 The bridge was envisaged to be a multi-span bridge approximately 100 m long with a central opening section for marine navigation with navigational piles both up and downstream of the new footbridge and including miscellaneous site works, abutments, services and engineering.

The footbridge was envisaged to become an iconic feature for the Whangarei City landscape forming part a new loop walkway/cycle route that will join the Town Basin Marina to the new Lower Hatea River Crossing (Te Matau a Pohe).

Steve Bowling Contracting Limited were able to offer the client a significant saving with some innovative thinking and consulting with our engineering subcontractor to provide an alternative piling methodology. After site specific geotec was undertaken by laying swamp mats across the mudflats, we were able to get geotechnical information at the actual pile location. The geotechnical results found that bottom driven piles could be used and we could achieve the engineering requirements by founding the piles on the gravel lenses. This methodology was opposed to driving through the lenses to a much deeper founding level, therefore making a significant saving to the client on this new piling methodology.

To construct the new Waiarohia Footbridge, we first had to construct a temporary staging to give access to the pile locations. Other than the abutments, all of the bridge was constructed in a tidal marine environment. Consideration had to be given to the disturbance of the seabed & sea life, effect on the water quality & potential pollution due to the use of construction machinery & materials.

The temporary access was engineered to allow access for all construction plant including 40 Ton piling rig, concrete trucks, pumps, hiab trucks and other machinery. Part of the construction required a temporary pile guide frame cantilevered off the temporary staging  to both act as guide to accurately locate the pile centre and as a stage to perform the installation of not only the casing, but also to install and cast into place the precast pile stems. The staging was used on the south side of the river, then on completion of the first half of the bridge, was transferred to the north side and reused to complete the structure. The temporary structure was removed on the completion of the project with no visual or environmental consequences to the seabed.

“We were very impressed with how Steve Bowling Contracting took the architects vision and turned this into a reality on site. This required some challenging engineering and construction, particularly given that the bridge structure is curved both horizontally and vertically which gave no room for error. Every single piece of the bridge was a bespoke one-off unit which had to be made precisely to fit. The fact that the bridge came together without a problem in a challenging marine environment was a credit to the construction team.

The quality of workmanship was outstanding and the attention to detail was to a high standard….

…We would definitely work with Steve Bowling Contractors again and would recommend them to any future clients.” Mark Seakins – Project Manager, Whangarei District Council – 7 May 2015

Bowling Infrastructure Group considers it imperative that all staff return home to their families fit and healthy at the end of each day, the impact of our works on the environment is minimised, and that our projects are constructed to specification, … END_OF_DOCUMENT_TOKEN_TO_BE_REPLACED